Rexton has an extensive walking trail system featuring a series of interpretive displays. Visitors and residents are encouraged to enjoy the natural beauty of the village and learn of its rich heritage.By following the trail, you will learn about the following: 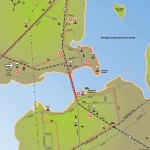 Edward Hannay, regarded as one of the shrewdest horse traders who ever lived, would never pass a pedestrian. He would say: ” He knows something that we don’t know…

The Kent Northern they called it. This line ran from Kent Junction to Richibucto. “… it was really something… consisted of an old steam locomotive, a few boxcars, a passenger car and a caboose…

Wood, in all its forms, has been important to the economy of the area for many years. For close to a century, the livelihoods of many of Rexton’s citizens were dependent on the local sawmills…
There is much more… come, walk the trail and discover the rest of the story